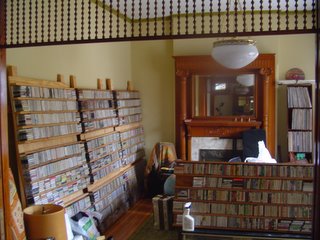 Zan responded to a post I made on the Yahoo Discussion group, and also set up an account on flickr to join the project image pool. Thanks Zan!

The name of his blog says it all, Zan Hoffman’s Cassette Obsession is truely that. His collection is large, and he writes about managing the scale of so many tapes. His blog documents where his collection started, and the shelving he implemented to house the final display.

I have 900 tapes in the attic that are not home-taping related. The rest of my collection is downstairs in my studio. I recently counted them all: 5470 cassettes.

I am not sure I have that much digital music. The picture above however, contain mostly Zans’ and his networks original recordings and those he collects by trading. Zan is a true media ‘producer’, and has much more than commerical music occupying his collection. In fact as far as the Yahoo group is concerned, it seems to be largley comprised of other such musicians that still use the cassette to document their work. Zan has some unique insights on some of the qualities of this media format.

Heat, moisture and playing them in bad cassette decks will destroy tapes, but in my experience even the crappiest brand tapes from the 60’s still hold up as long as you take care of them. Doubt we’ll be able to say that about cdrs.

By far this is the most extensive collection I have seen documented on the internet, and I do not think it is going to be ‘digitized’ anytime soon. Check out Zan’s home page.